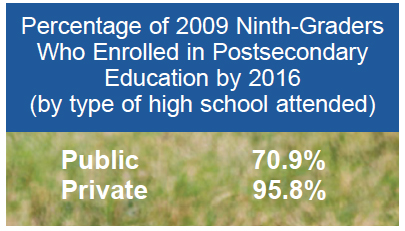 Students who attended private high schools as ninth-graders were more likely to graduate from high school and to enroll and persist in postsecondary education than ninth-graders in public high schools, according to a report released last month by the National Center for Education Statistics.

The High School Longitudinal Study of 2009 (HSLS:09) is a massive ongoing study that is following a nationally representative sample of students from public schools and private schools who were ninth-graders in the fall of 2009. The study tracks the same cohort of approximately 20,000 students as they progress through high school, postsecondary education, and into the workforce.

Read more about the study’s findings in the March issue of CAPE Outlook.